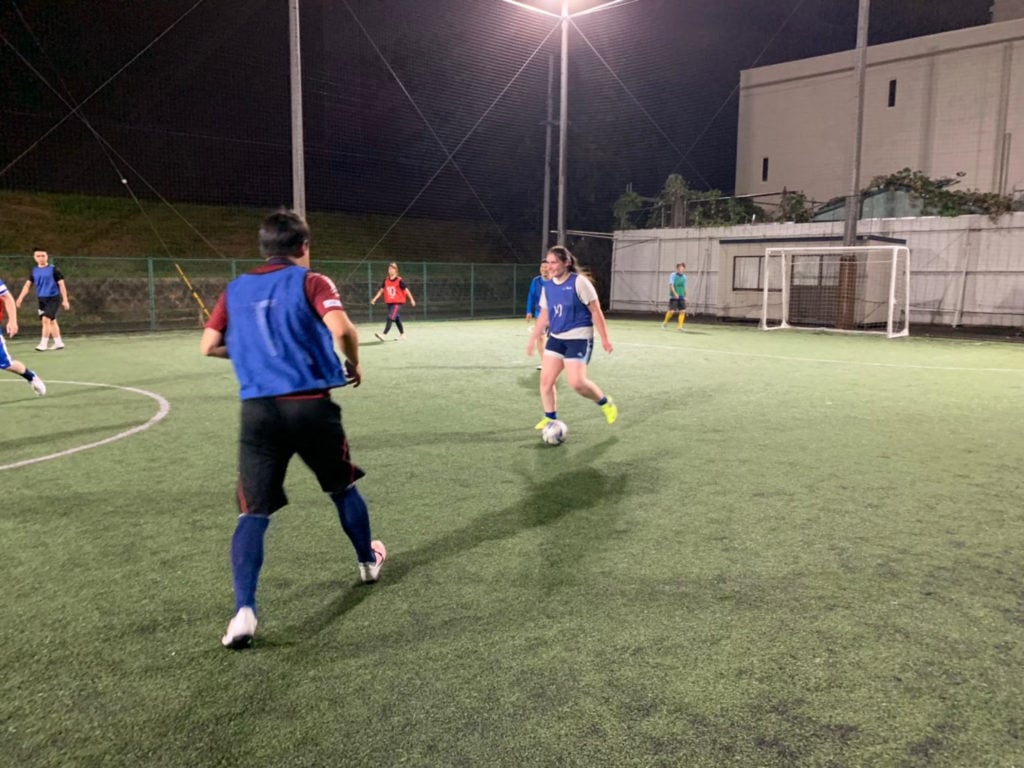 For the Fall 2019-Spring 2020 academic year, I had the amazing opportunity to participate in a local futsal circle (club) in Kyoto. I’ve played soccer my whole life, and knew that I wanted to continue playing in Japan, so I spent quite a bit of time online researching the different clubs that advertised themselves on various social media websites. Although there were some soccer clubs, the majority were futsal clubs (a game like soccer but on a smaller field and with fewer players). This is how I came across the futsal circle I joined in Kyoto, via a Japanese sports-club forum.

On their webpage, the circle described themselves as a group open to everyone, even beginners with no prior experience, and also mentioned that they were actively recruiting female players in the hopes of reaching their goal of a 50/50 distribution of women and men. With this in mind, I thought they were the best fit for me. Although my Japanese was not very good, I took a chance and messaged the circle’s administrator on the website.

Once we had exchanged a few kind messages, I decided to join. Although I was nervous (what if my Japanese was so bad they didn’t understand me? Or what if they were all pros and ran circles around me?) I was super excited to get to meet new people and have the chance to play futsal while I was in Japan. I managed to find the place, introduce myself to everyone (make sure you’re ready for a 自己紹介) and participate in the games without any problems.

After that first meeting, I realized that my prior fears had been groundless. Because the circle was relatively laid-back, it was easy to converse with the other members and no one really cared about each other’s skill levels. I was delighted to chat with newfound friends on the sidelines during breaks, and get some exercise with the ultimate goal of just having fun.

If you’re interested in joining a circle or a club while on AKP, one piece of advice I would like to share is this: when you join, make sure you know what kind of time commitment they will expect of you, and whether or not you think it is feasible to balance with your schoolwork, spending time with your host family, and generally exploring your surroundings.

The various group activities that we consider to be clubs are categorized as two different entities in Japan: typically, stricter clubs are called 部活（ぶかつ or club activities), while more relaxed clubs are called サークル (circles). In my case, it was a circle that only met once a week for 2 hours of scrimmaging and did not have specific rules for commitment. It was a nice thing to look forward to every week, but it did not prevent me from having time to sightsee, hang out with friends, or explore Kyoto. Other clubs and circles may have mandatory meetings multiple times a week, or schedules that fluctuate. If a club seems particularly strict, I would suggest waiting until you have a solid understanding of what your life abroad and workload are like, so that you can take that into account as you decide whether or not to join.

But once you find a club or circle that seems to be a good fit for you, the most important thing is to go in with an open mind and try your best to engage with the other members. Even if you are nervous about your speaking skills, initiating conversation with others and making an effort to speak Japanese will make a great impression (especially if the person you are talking to is nervous about their English). Although the first time may be awkward, don’t be discouraged! It takes some time to settle into a group, and if you keep trying, you may find yourself a wonderful group of friends with which to spend your time abroad.